The Adam and Dr. Drew Show 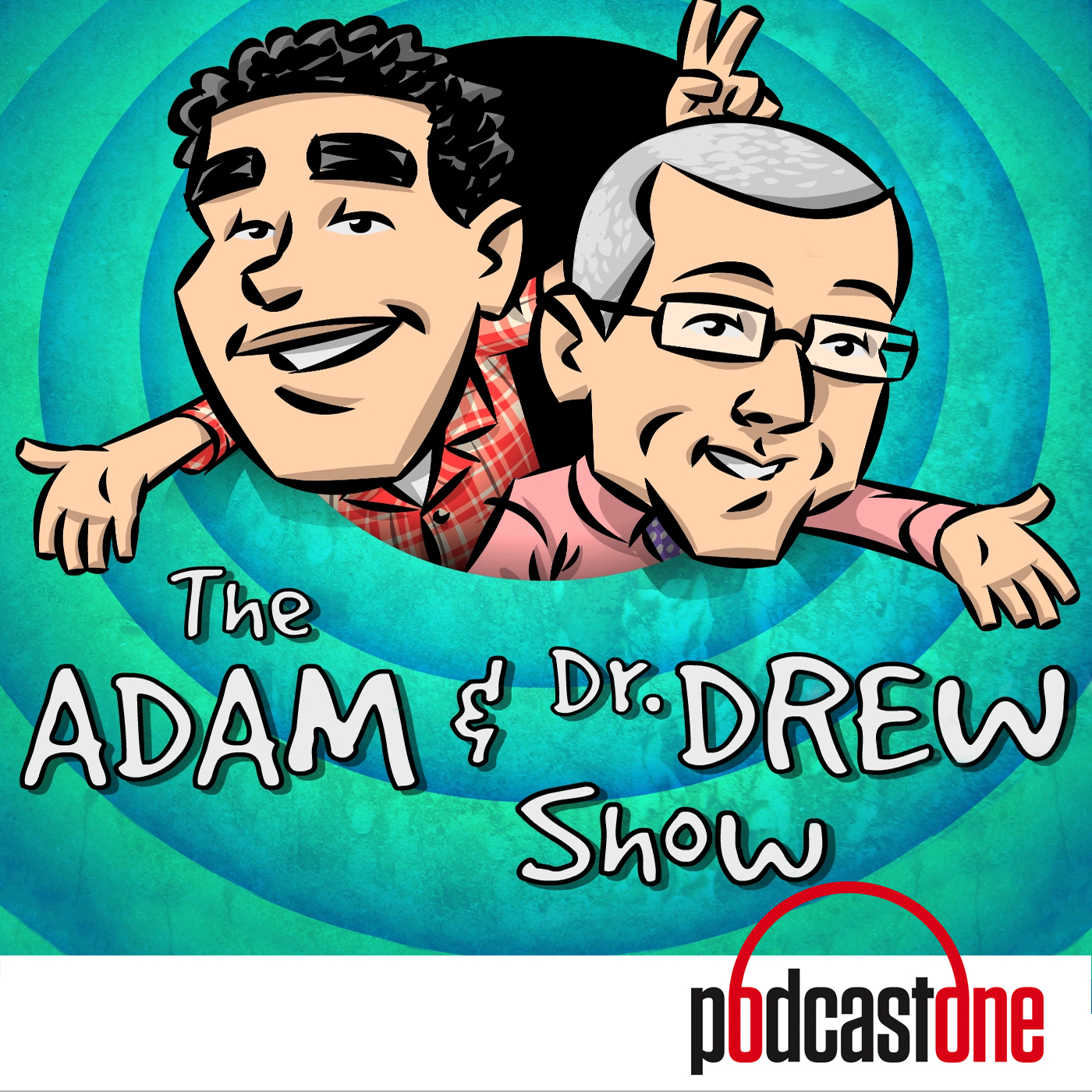 Adam Carolla & Dr. Drew Pinsky reunite the partnership that made Loveline a wild success and cultural touchstone. In each episode Adam and Drew take uncensored, nothing-off-limits, calls about sex, drug, medical and relationship issues. Dr. Drew brings the medicine while Adam's comedy and rants are the spoonful of sugar to make it go down.

Confirmed 1
#1657 You Probably Voted For That
Mark and Dr. Drew pick up right where they left off, paying off Dr. Drew's outrage at CNN by harkening back to their April 2020 report highlighting the dangers of Jacksonville Florida's dangerous decision to re-open their beaches. They go on to discuss the legalities of new standards in public health messaging using the recently passed California AB 2098 as an example of what may be to come. They also discuss the situation in Iran as they explore how the women of that country may be the ultimate driving force behind any change that may come. Please Support Our Sponsors: Babbel.com/ADS Geico.com
Expires in 5 hours
Published Wednesday

1
#1656 Oh Really Erin Burnett?!?
Mark is back filling in for Adam this week and he and Drew come out of the gates hot discussing Drew's recent travel to the middle east to film an upcoming 'Special Forces' show for Fox. After marveling at what Drew went through they move on to discussing the situations in Iran and China with a focus specifically on China. Please Support Our Sponsors: TommyJohn.com/ADS TenThousand.cc/ADS
Published Monday

1
Pinhead Whizzer (The Adam and Dr. Drew Show Classics)
Adam and Dr Drew open the show harkening back to some of the parody songs of their youth leading Adam to examine how the evolution of language is being used to obfuscate the meaning. Later, Dr Bruce aka Dr Spaz fills in for Dr Drew as he and Adam discuss the legitimacy of turning left against a red arrow and the groupthink that prevents others from using their own judgment. Finally, Adam and Drew discuss tweets from President Trump suggesting that he would place a wholesale ban on transgendered people serving in the military and explore how the terms surrounding those communities have changed over the years.
Published Saturday

1
#1655 Some Random on Twitter
Adam and Dr. Drew open the show continuing, and succeeding, in their quest to find the clip Adam wanted of Dr. Ashish Jha telling a White House press conference that people shouldn't be listening to those on Twitter when it comes to Covid. They then turn to the phones and speak with a caller who is curious how Mark Geragos is able to remain a liberal given the current state of Los Angeles and California. This leads to a much larger conversation on spending as it relates to education and what results we are seeing as compared to our spending per pupil. Please Support Our Sponsors: Ro.co/ADS Bioptimizers.com/AdamDrew use code AdamDrew
Published 12/02

1
#1654 Downer to Disco
Adam and Dr. Drew open the show continuing their bummer conversation about the art of the early 1970s reviewing a clip of Billy Jack and marveling at how quickly our country moved from that to the very different disco era in a short period of time. They then turn to the phones and speak to a caller who has been a fan since the Loveline era and wants to point out some of the things he missed as the show has evolved from what it was then to what it is today. They also speak with a caller who worries that masks are going to be a 'forever' reality for a descent sized segment of Americans. This leds Adam to go searching for a clip of the White House Covid response head telling people that they shouldn't be listening to 'random people on Twitter'. Please Support Our Sponsors: SimpliSafe.com/Adam2 The Jordan Harbinger Show
Published 11/30

1
#1653 They Lie
Adam and Dr. Drew open the show discussing different people's dispositions in the wake of Drew still feeling jet lagged several days after returning from his European vacation. Adam also points out something a fan alerted him to on Twitter, that generally those politicians who advocated hardest for lockdowns were almost universally reelected to their posts. Drew also discusses the way that his eyes were opened to the behavior of the rest of the world and how drastically different it was than here in the US. As the show wraps up the guys come back to the 1971 film 'Billy Jack' and Hogan's Heros Please Support Our Sponsors: TenThousand.cc/ADS Geico.com
Published 11/28

1
#1652 Speed Kills
Today Dr. Drew is joined once again by Mike Catherwood as Mike spends much of the episode regaling Dr. Drew with the story of his trip into the desert to buy drugs and his encounter with 'Vamp'. This leads to a larger conversation on meth and other street drugs and the disastrous outcomes that they lead to. The conversation then surprisingly turns to former President John F. Kennedy as Mike explores how he too was using some of the same drugs, even if it was under doctor's supervision. As the show wraps up the guys discuss some of their frustrations with the current state of addiction medicine. Please Support Our Sponsors: BlindsGalore.com - let them know we sent you
Published 11/25

1
#1651 Complete Disregard For People's Health
Dr. Drew and Mike are back at it today and they open the phones by going straight to the phones to speak to a caller looking to thank them for their work together in the Loveline days. They also speak about Mike's podcast and how it morphed away from the Loveline style and more into topics of Mike's personal interest. They also discuss the motivation behind Mike's move out of California and harken back to the time that Dr. Drew gave Mike a flu shot live on Loveline and what happened as a result. As the show wraps up, Drew questions Mike about his online obsessions with beautiful women and how it manifests today as opposed to their Loveline days. Please Support Our Sponsors: The Jordan Harbinger Show BlindsGalore.com - let them know we sent you
Published 11/23

1
#1650 Rudy
This week Adam is away so Dr. Drew is joined by his OTHER long running Loveline co-host Mike Catherwood zooming in from Austin. Mike and Drew discuss Mike's experiences with Covid both as an Angeleno and since his move from LA to Austin, TX. Later, we are joined by Mike's friend and past guest Rudy who gives an update on his life and the lives of his children. As the show wraps up Mike comes back and Drew gives the audience an idea of what it's like to be in a text conversation with Mike. Please Support Our Sponsors: TommyJohn.com/ADS BlindsGalore.com - let them know we sent you
Published 11/21

1
My Degeneration (The Adam and Dr. Drew Show Classics)
Adam comments on an Op Ed from the LA Times about arming faculty and draws a comparison to the Dunkirk evacuation of WWII. Judd Apatow calls in and talks about his twitter addiction and Adam reveals the reviews that hurt the most. And finally, Adam unloads some frustration on experts who ignore anecdotal evidence and people’s relationship with the truth.
Published 11/19

1
#1649 You Sound Marginalized
Adam and Dr. Drew open the show by going straight to the phones and speaking with a variety of callers who mostly want to talk about the aftermath of Covid. They also speak to a caller who wants to know how vaccination may be viewed in the future and if there is a chance that vaccine users may end up having to pay higher insurance premiums because the vaccine has put them at higher risk for heart issues. They also speak with a caller who is disagreeing with his radiologist wife about whether to booster their children or not. Please Support Our Sponsors: SimpliSafe.com/Adam2 BlindsGalore.com - let them know we sent you
Published 11/18

1
#1648 Have You No Shame?
Adam and Dr. Drew open the show talking about the changes coming to Twitter after Elon Musk acquired the company in a $44 Billion deal and has been making some large changes including an $8 per month fee to be a verified user on the platform. As the conversation evolves Adam harkens back to a recent clip of President Biden discussing 'junk fees' as it relates to air travel and how those fees hit low income and people of color hardest. They then turn to the phones and speak with a caller who got two doses of the Moderna Covid vaccine and is now concerned that she may have heart issues in the future. They also speak to another caller who thinks Drew has been too reserved in his outward analysis of Covid issues. Please Support Our Sponsors: BlindsGalore.com - let them know we sent you Bioptimizers.com/AdamDrew use code AdamDrew
Published 11/16

1
#1647 Dragged Into Adulthood
Adam and Drew reunite after a week with Mark filling in and they open the show discussing a tweet sent by Vinay Prasad discussing Trump derangement syndrome especially as it relates to health policy surrounding the Covid 19 pandemic. They also discuss how the most progressive societies seem to be the ones who are becoming the most dictatorial. They also discuss their feelings that one way or another there needs to be a punishment for those who were pushing policies that harmed children and are now looking for 'pandemic amnesty' to obfuscate their behavior. The guys then turn to the phones and speak with a caller from Hawaii who is wondering if Adam ended up pulling the trigger on an Acura NSX he was looking at and has a question for Dr. Drew about his daughter's transition and how to go about talking to her about it. Please Support Our Sponsors: MoinkBox.com/ADS RocketMoney.com/ADS BlindsGalore.com let them know we sent you!
Published 11/14

1
Won't Get Stooled Again (The Adam and Dr. Drew Show Classics)
Adam and Drew open the show talking about their thoughts on the recent practice they've both gotten into of taking very cold showers. Adam and Drew also examine the thought process that many people have and explain why they would ideally like people to not be operating from a place of fear. Later the conversation turns to the uptick in random homeless attacks and Adam recounts an attack of his own that was perpetrated against him in his construction days. Finally they go to the phones and take calls about Hyper-vigilance, the effects of fatherless homes on young men and women, and Adam has a change of heart about allergies.
Published 11/12

1
#1646 A Massive Nuisance
Dr. Drew opens the show paying off for Mark his promise to discuss the meeting that he had with the board and what concerns he walked away with. They also discuss some of the recent behavior by Kanye West and what Drew took away from listening to his interview with Lex Fridman that he hasn't heard discussed by others. Drew and Mark continue to marvel at the lack of guidance before Mark has to split and Drew wraps up the show talking to a caller who is concerned with the direction of today's American adult. Please Support Our Sponsors: BlindsGalore.com let them know we sent you JustWorks.com/Pricing TenThousand.cc/ADS
Published 11/11